There is something relaxing about sitting around a camp fire.  It does create a feeling of well being, sitting there chatting with friends and family and focussing on the flickering flames between you. For many who have been cooped up indoors for several months, the thought of getting into the great outdoors and being able to do something as basic as having a camp fire is a completely understandable desire.

However, the humble camp fire has the ability to create havoc over an area completely out of proportion to its original size. There are many who will remember the wild fire from 2017 which engulfed large areas of land around Suilven near Lochinver caused by a single camp fire. (https://www.bbc.co.uk/news/uk-scotland-highlands-islands-39817632 )

Earlier this year another single camp fire, left close to the A837 road set fire to a large area on the south side of Quinag. A combination of a dry and late spring together with a strong breeze made sure that the remnants of the camp fire lit the heather and grass around. Thankfully this one was extinguished by the local fire fighters before getting too far. 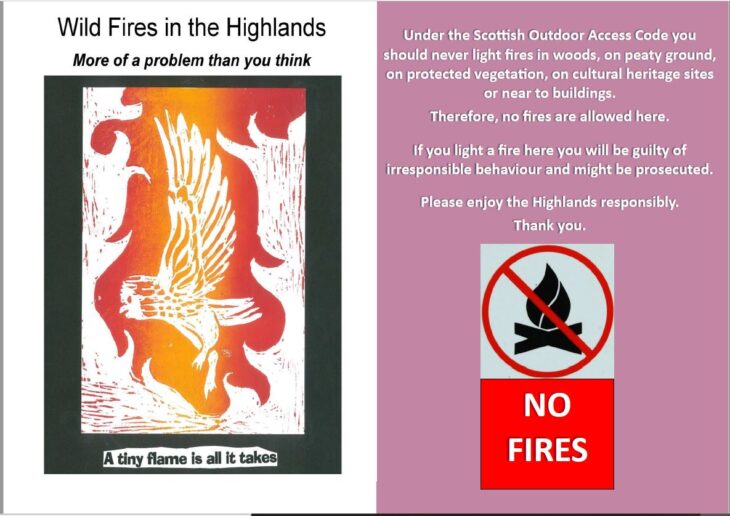 It was with all this in mind that a number of landowners and organisations across the north west Highlands came together to produce a consistent fire awareness message across the area.  The Coigach and Assynt Living Landscape Partnership (CALLP) coordinated the process as part of their Land Management group together with members of the West Sutherland Deer Management Group.

In 2020 a survey was carried out by NatureScot looking at informal camping in the north west. One of the most striking issues that came out of the report was the number of fire sites found across the area. In one small location, Ardvreck Castle area on Loch Assynt side, there were 32 individual fire sites. These fire sites not only pose a risk to the wider area but are also creating localised damage on a scale not seen in previous years.

It was all these risks that the CALLP group wants to try and reduce through a combination of fire awareness signage and a media campaign specifically aimed at those who are visiting areas in the Highlands. 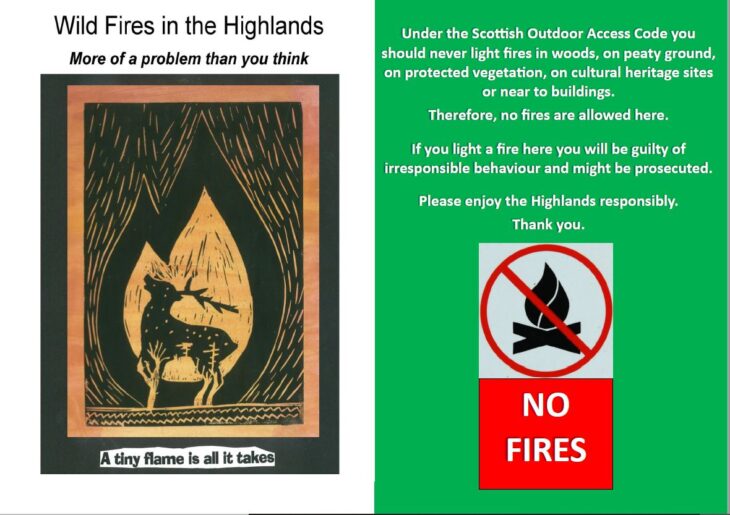 In 2019 the High Life Highland Rangers and Wester Ross Biosphere worked with Ullapool High School S3 pupils. A series of art works were produced as part of their wild fire awareness campaign.  There are three of these pieces that the CALLP group feel are particularly striking and represent the issues of wild fires very well. These together with a collaboratively produced text have been made up into 48 signs which have been distributed and erected on areas across the Highlands. It is hoped that these will help to reduce the numbers of camp fires across the area and thereby minimise the risk to much larger areas of ground and all that live within it. 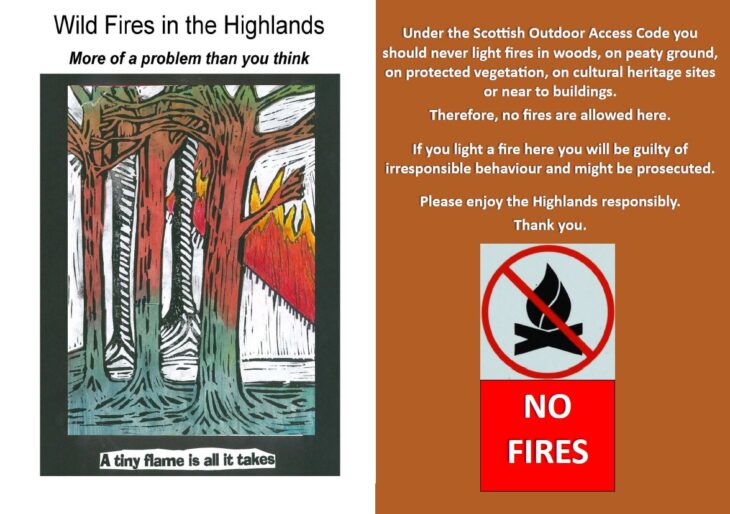 With the current heat wave, dry ground, combined with massively increased visitor numbers, the threat from fires has never been greater. Please help us to spread the word. If anyone is interested in using the same designs, please do get in touch on info@coigach-assynt.org.

General, Land and Conservation Management, Other