Meet our Suilven Artist in Residence!

Hello CALL blog readers, I’m Alex Mackay and I’m this year’s Suilven Artist In Residence. I’m spending time throughout the year in the surrounding areas of Suilven creating a new sound work, but before I talk about that allow me to introduce what I do and what drew me to undertake this work.

Broadly speaking, I’m a musician. My work takes varying forms; I play in bands, I collaborate with other artists working in different artforms, and I make music as a solo artist. My work for this residency falls into the solo category of my output; my solo work often consists of music made on conventional instruments (both acoustic and electronic), but also involves working with sound gathered from sources outside of traditional music making. Field recording – i.e. recording the sounds of a particular place/space – is a central part of this, and through this I aim to incorporate the sonic qualities of a place into the fabric of the music to create new perspectives on both the musical material and the place the sounds came from.

The opportunity to come to Suilven, spend time in the area and produce new work in response to it was very attractive for a number of reasons. A big one is that for an artist making the kind of work that I make, chances to spend time and work in a relatively remote part of the country are few and far between, and since the sonic exploration of unique environments is a central part of my work, this seemed like a fantastic way to further this aspect of my work. Also, the strikingly unique geography of Suilven and the surrounding area of Assynt seemed from the get-go to be full of rich potential for sonic exploration; a unique topography can often result in a unique sonic ecology, giving the area a soundscape unlike anywhere else, and will also guide someone exploring that soundscape to listen from new, differing perspectives. All these elements combining convinced me that this would be a great opportunity to not only make something interesting and exciting but also make me think about what I do and how I do it in new ways.

So far, I’ve made two trips to Assynt; a short visit in May to meet the folks at CALL, get acquainted with the studio at Glencanisp and make plans for how I would approach the residency and the work I’ll be making. Then in July, I came back for a longer visit where I spent time out in the landscape, recording and beginning to put together the foundations of the work in the studio.

On most of the days of the main visit, I would spend at least an hour walking in the area of the studio and Suilven, recording the sounds of the environment and getting to know the geography of the area. Some days would involve planning reaching specific points, other days were more of a free roam, seeing where the paths would lead me and what sounds would present themselves. Of course, an exploration of the area in whatever form wouldn’t be complete without making the ascent up Suilven; I made the trip about half way though my stay, and I’m sure it comes as no surprise to say it had a profound impact on the direction of my work – both during the lead up to it and the time spent in the area afterwards. In the days before I made the trip, even though Suilven itself wasn’t at the forefront of what I was exploring or the sounds I was capturing, its monumental presence in the landscape meant its presence was always felt no matter what I was focussing on at any given moment. As the day of making the trip approached, I even felt a slight anxiety at the prospect of ascending it; I’ve done plenty of mountain climbs before, but how the mountain protrudes from the landscape in such an unusual and dramatic way makes the thought of climbing it both thrilling and nerve-wracking.

I could write pages and pages about the experience of climbing Suilven itself, and I’m sure others could and have written far more eloquently on the subject that I could so I will save that for now; however those feelings of anxiety transforming into excitement, the personal experience of the mountain transforming from one of a distant monolith to an intimate connection with the detail of the surface as one ascends, and then seeing the landscape sprawl from the perspective of the summit in a way unimaginable from down below were things that really stuck with me (somewhat of an understatement) and solidified my approach to the work I was beginning to produce.

This raised what has become the defining inquiry of the process of the work; how can I – through the material of recordings of the area and the technological tools at my disposal – create something that has the unique sonic ecology of Suilven at its core while conveying this experience of a transforming sense of scale and perspective.

This is something I am still in the process of exploring and answering through the work, however the main focus of the rest of the time of that residency period was devising ways of working with the material in this direction, through editing and analysing recordings, and creating some audio processing programs which would enable me to process the audio with geographical data from the landscape. I work a lot with a computer program called Max/MSP, which is essentially a programming platform which (among many other things) has the potential to convert data from a range of sources into data that can be used to control musical parameters; a very simple example of a possible application in this context would be linking the volume of a particular sound to the contour of Suilven, so the volume would rise and fall as it follows the contour of the mountain. So, with these ideas in mind I began to explore how I could sculpt and transform these sounds in relation to the landscape, and how I could arrange this material within a piece of music to play with the ideas of scale and perspective that I mentioned earlier. This process is still ongoing as I speak, but it was a really valuable part of the process to be able to start this work in the studio at Glencanisp – the space is equipped with everything I need to do this work, while being situated in the environment that the work is centred in, with a direct view of Suilven from the window!

As I work towards completion of the work from my studio in Glasgow, I’m also planning my next trip for late September, when I’ll be coming back to host some workshops in the studio at Glencanisp. Although some of what I’ve described here may seem a bit complex, the core ideas behind field recording are incredibly simple – find a soundscape that you like, capture it, and present it in a new way. My main tools are a sound recorder and a laptop; the technology is becoming increasingly accessible, so I’m keen to show people how easy it is to start doing it yourself. In the workshops, we’ll be going out into the area around the studio, learning how to capture sounds outdoors and then going back into the studio where I’ll demonstrate some of the techniques I use to make my work and together we’ll make a short piece from the sounds we’ve recorded. I’m really looking forward to introducing more people to the world of field recording, and hopefully by the end of it a few more people will be exploring it for themselves! 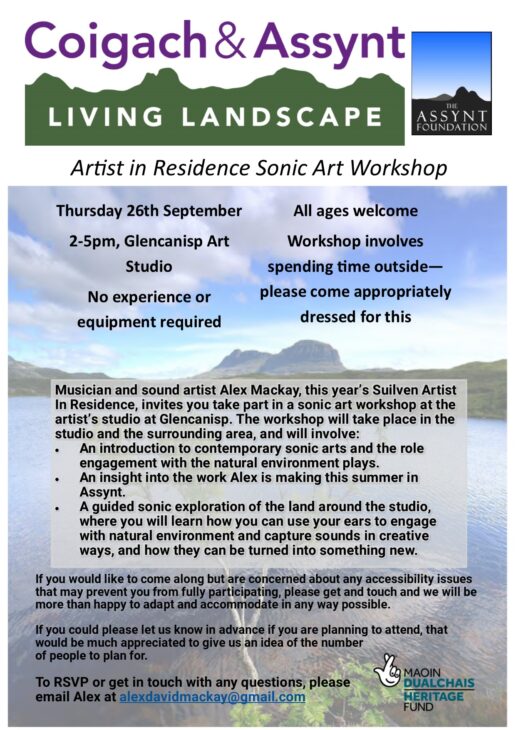